Photography in a kayak
.. and the inherent dangers 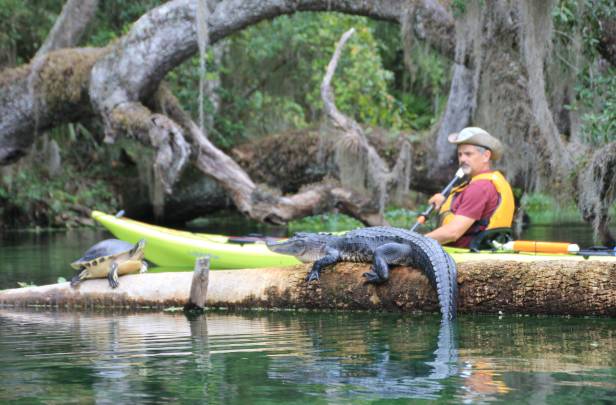 Definitely not an easy task when your camera is not waterproof, let alone not rated for an ocean voyage. There were many variables and challenges that presented itself because this wasn't a typical day of paddling and photographing. 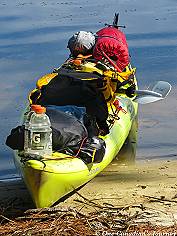 In fact, I was living out of my kayak for several weeks, so my storage space was very limited to the essentials of what I could and could not take. Therefore, my camera gear was stripped to the basics:

Keeping it safe and out of harms way when not in use was fairly easy. As long as it was inside the camera case and inside the dry bag, I had no worries. It was also securely placed inside the cockpit of the kayak at the base of my feet, between the front wall and my feet, where there was enough space for two 10-litre dry bags.

I will admit, it wasn't always easy reaching for it, but it was necessary to keep it out of the way should I capsize and need to exit the kayak quickly.

I really had to be picky when I chose to pull out my camera. Even when the water appeared calm, I was still faced having the paddle in hand or nearby, along with currents that would easily turn the kayak in the opposite direction of my shot.

90% of the photos are taken very quickly. The method I developed was this: 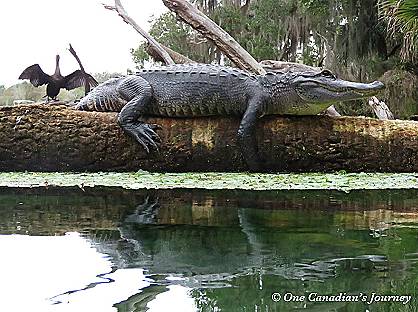 The best example of having to face currents in what appears to be calm water and trying to avoid the possibility of a trip to the hospital was this situation shown above in the photo of me and the alligator.

What you don't see is the current that was pushing me closer and closer to the alligator and all the obstacles (trees, stumps, plant life) in my way. My only way out of this situation was to paddle backwards.

Also, before this photo was taken, I had performed my above mentioned method of attack to quickly take a decent photograph of the alligator before I was put in harms way, via the current.

It was quite the production for a few quick photos, so I really had to know ahead of time of what I wanted to capture. 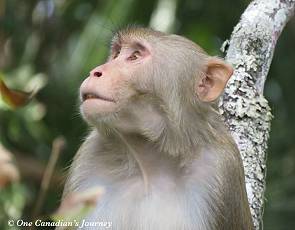 Another example: Prior to this photo being taken, a kayaker had been pushed by the currents too close to the shoreline, where a baby monkey was playing. The mother monkey took exception and charged at the kayaker. The kayaker flipped over and swam away, avoiding the wrath of the mother monkey.

Keeping my distance and manoeuvring the kayak through the current, I was able to take a few quick photos of the monkeys.

Other times, the currents and nature works in your favour and you can take your time photographing. But don't let that give you a false sense of security because let's face it, you're dealing with elements that quickly change. 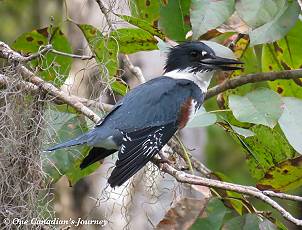 Other times, it was pure luck… I happened to have my camera out when this Kingfisher dove into the water right in front of me, flew up and landed on a branch to shake the water off.

As you can see, photography and kayaking is possible and can be very rewarding. You just have to be very careful how you approach it.

First and foremost - safety. Don't let your camera get in your way of you being safe. Everything else will come naturally and you'll capture some amazing photos. Check out all the photos from a kayaking adventure - ocjthegreatloop.wordpress.com

This article was written by Jayson D. Ambrose, the guy behind One Canadian's Journey onecanadiansjourney.com, an avid outdoors enthusiast, explorer and photographer. Encouraging others to get out and see the beauty that is all around. (Jan. 2017)