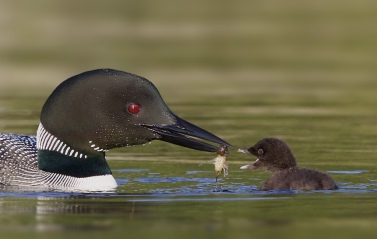 The haunting wail of the Common Loon across a lake at night is probably the most Canadian sound there is. It reminds us of solitude and quiet. The "tremolo" call, a laughing sound, is used to signal alarm or annoyance. The "yodel" is a long rising call used to mark territory. The "hoot" is a short call to family members.

Four of five species of Loons are found throughout Canada except for the far north. They are thought to be one of the oldest birds still living! Loons migrate from ocean coastlines in winter to inland

freshwater lakes in spring, as soon as ice leaves the lakes. A loon was chosen to grace the new Canadian dollar coin (see right).

The Common Loon has a black-and-white checkered back with shiny black head, dark pointed bill, white belly and wing lining, and a necklace of vertical white stripes and a horizontal black bill (this identifies it from a distance). In summer their eyes are red. Young birds have grayish plumage. Loons are large, up to 5 kilograms (11 lb.) and 70 - 90 cm. (2-3') long. Loons tend to swim low in the water, with head erect (unlike cormorants with head tilted upwards).

Their nearly solid bones make them heavier than other birds and they dive very well and quickly. Their eyes can focus under water as well as in air. They are able to concentrate oxygen in their leg muscles to sustain them during dives as far as 60 meters (200') below the surface. They can be seen "running" along the surface of the water before lifting off into the wind. They fly awkwardly, with a humpbacked profile, with lower head and neck and feet extending back beyond the tail, making them easy to identify in flight.

On the Rideau, loons arrive in early spring (May) and start to nest from the middle to the end of May. They are solitary nesters, building a nest beside or over the water and line it with any handy vegetation. Nests may be built on small islands or the far end of bays and inlets. Loons prefer a nest over deeper water, away from land for protection from predators. In several lakes, residents have constructed artificial loon nests, a floating platform, 1.2 to 1.8 metres (4 to 6 feet) square. These wonderful birds usually mate for life, so once a nesting pair uses a nest, they will return year after year.

Loons lay dark speckled eggs (usually two), taking several weeks to hatch. Chicks are born with dark waterproof down and can swim right away. They ride on either parent's back for a few weeks to avoid predators such as fish, snapping turtles, and birds. Baby loons are fiercely protected by their parents, who will literally "walk on water" to distract predators. If you see a wild dance from a Loon, be sure to leave as you have disturbed its nesting site!

loons dive deeply for up to a minute or more to find food, mainly fish such as catfish, sunfish, perch, suckers, smelt, and minnows. they also eat shellfish, frogs, and aquatic insects.

The loon is an expert diver, reaching depths up to 60 metres in search of food. Unlike other birds, many Loon bones are solid, which helps them dive. A Loon can also expel air from its body and feathers. This allows the Loon to sink under the surface of the water. The Loon can retain more oxygen during long underwater dives because of extra hemoglobin in its blood and large amounts of myoglobin in its muscles. Their eyes can focus both in water and in air. Large webbed feet and legs placed far back on a torpedo-shaped body also make the Loon a superior diver.

Early Inuits buried Loon skulls in their graves. The Loon was thought to act as a guide to the netherworld because of its song. The Ojibwa thought that the call was an omen of death, and the Thompson Indians thought it predicted rain. 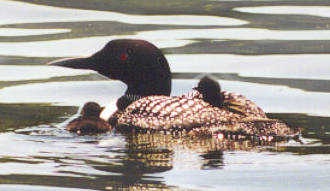 All Loons are protected by Canadian law and may not be hunted. Sadly, Loon numbers are declining due to many factors: acid rain reduces fish for food, loss of habitat from shoreline development, boat wakes destroying nests, boat props killing chicks, lead poisoning from swallowing fishing sinkers, and natural predators. Residents on "quiet" Canadian lakes have created articial nesting sites on platforms over the water to aid in successful nesting. According to the Wisconsin Loon Survey (link below) loons are becoming tamer. Tame loons are likely to reproduce near humans, and they produce tame chicks. Unfortunately, a successful breeding year is 70% more likely to result in attempts by other loons to take over the territory.

The Legend of the Loon

The Tsimshian Legend explains how the loon obtained its distinctive necklace of white feathers. On the banks of the Nicola River, in the village of Shulus, there lived an old blind medicine man named Kelora. The only sound that could wake him from drams was the call of the loon, the bird he believed to be his animal father and protector. One winter when famine threatened, Kelora, warning his prized necklace of dentalia shells, took his magic bow to slay the starving wolves that threatened his people. In the spring, Kelora asked the loon to ask him a great favour to restore his sight. The loon granted the medicine man his wish and, in return, Kelora removed his collar of shells from his neck and tossed it to the loon. The circle of shells wrapped itself around the loon's neck and a few scattered on its back - this was now the loon received his distinctive necklace.

Links to other Web Sites