Nov/03: A series of public beaches along forty miles of Lake Huron shoreline have been permanently posted as unsafe for swimming. This area has had high levels of E. Coli bacteria levels for the last ten years. Lake Huron is the world's third largest fresh-water lake and is a major tourist destination. Closures like this should wake up residents and businesses on both the American and Canadian sides of the Great Lakes to the consequences of ignoring pollution. 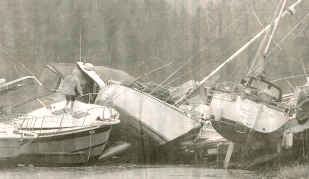 Sep/03: Atlantic hurricane Juan made landfall near Halifax early on September 29, 2003. Haligonians were surprised at the power of the storm which destroyed or damaged coastal areas, ports and hundreds of boats. It cost the Nova Scotia government $18 million. The storm also downed most of the trees in a popular park on the coast just south of Halifax. (Photo from The Ottawa Citizen)

Aug/03: The Ontario government was planning to pass legislation that would suspend the drivers' licence of those convicted operating a boat while drunk - a one-year suspension for first offence; a second offence would result in losing your licence to operate a car for life.

Currently operating a boat while drunk is a federal offence. Federal penalties under the Criminal Code can ban drunk boaters from operating a boat, the length of time depending on the number of offences.(Even if the government changes in October, I suspect that federal-provincial cooperation will proceed. -Pat)

Jul/03: The agreement between the City of Toronto, the Toronto Port Authority and the Government of Canada - that governs the operation of the TCCA - has now changed and will allow for the construction of a bridge between Toronto Island and the foot of Bathurst Street. A 1983 agreement prohibits the construction of a fixed bridge and all three parties had to agree before construction could proceed. A lift bridge that would open on a timed schedule is planned. Comunity Air is organizing opposition to a bridge and expansion of the island airport. Contact Allan at (416)366-3690.
Transport Canada news...

Mar/03: Amendments to the Canada Shipping Act are aimed at reducing boat noise - they will be enforced this summer. Boats constructed 1960 or later must either discharge their exhaust underwater or have a muffler fitted that must be engaged whenver the vessel is within 8 km. (5 St.mi.) of shore. The regulations are now clear, and police officers will be laying charges this year. If you are bothered by excessive boat noise, get as much information as you can about the vessel and owner, when and where it occurred and report it to the police. (Search for sor40-e.html in the Canada Gazette.)

May 31/03: Canada's lone competitor in the one of the toughest sporting events "The Around Alone race" has completed an amazing feat of seamanship, sailing alone through 27,000 miles of the world's roughest oceans over the last 8 months. Building the 12 metre sailboat "Spirit of Canada" without sponsorship and surviving dismasting tells only a little of his tenacity. He was finally aided by many companies, clubs and the thousands of Canadians whose names are painted on the hull of this boat. A tip of the hat to you Derek - a true Canadian hero. Third place Class II overall time 245d 15h 44m. (spiritofcanada.net)

Apr. 8/03: A month after Derek Hatfield survived the rollover and dismasting of his small sailboat the former Mountie has resumed Leg IV of "The Around Alone race" from the spot where the near-tragedy occurred. Again he battled extreme winds and 20 metres waves, saying "It was the most nerve-wracking storm I've ever been in."

Mar. 7/03: Derek is lucky to be alive after being dismasted in huge waves in a storm rounding Cape Horn, at the tip of South America. "Spirit of Canada" was nearly destroyed March 9 at the southern tip of South America. Hatfield had just gone out to the cockpit, and miraculously managed to hang on to a life line as the boat righted itself.

1987: John Hughes of Nova Scotia was dismasted in the same area in the same race, but finished - the only Canadian ever to do so.
1996: Gerry Roufs of Montreal disappeared in in the same waters.

Mar. 5/03: In 1997, Diane Stuemer and her husband Herbert and their 3 under-12 sons set off on the trip of a lifetime - travelling around the world in a sailboat called "Northern Magic" to 34 countries and 65,000 kilometres. During the four years of cruising, Diane charmed thousands with her weekly articles in The Ottawa Citizen about the journey. After the family returned to Ottawa, Ontario, Diane wrote a book about their adventures, The Voyage of the Northern Magic and died of melanoma at 43 not long after.

Six years ago, Diane had her first brush with cancer that persuaded her and her husband Herbert it was time to follow their dream. Their sailing experience had consisted of six afternoon sails on the Ottawa River. The family of five acquired a 40-year-old steel sailboat Northern Magic and set out to sail around the world. The Stuemers' lives were touched by people in many countries and they and their boys wanted to do something to make a difference. The projects they started continues to grow. The Boniface and Hamisi Project helps students go to school in Africa. The Stuemers are also committed to The Friends of The National Parks Foundation, which is dedicated to preserving Borneo's endangered primates. (NorthernMagic.com))

Mar/03: Manure and fertilizer that strip away oxygen in Lakes and rivers do more than suffocate fish. Polluted water causes "hypoxia" - low oxygen levels in water - and like "gener-bender" chemicals like DDT creates fish with low testosterone level and tiny sex organs. Southern Ontario has 5 of the 10 top manure-producing watersheds in Canada according to Statistics Canada. Manure fertilizes draining into watersheds increase growth of algae, which rot, using up all oxygen in the water - hypoxia. This type of pollution caused the death of most fish in Lake Erie several decades ago, but better sewage treatment and fertizer practices have made it healthier today.

Mar/03: The City of Ottawa approved funds to develop a boat bypass around Chat's Dam at Fitzroy Harbour on the Ottawa River. Trucks and trailers moving boats around the rapids is the sixth such operation on the Ottawa River. This will open up a 50 kilometre waterway between Ottawa and Arnprior and linking to the Temiskawa Waterway, the 500 km. of river that flows from Arnprior to Notre-Dame-du-Nord. The waterway will eventually be connected to the St. Lawrence Seaway.

Feb/03: Asian carp have rapidly advanced their way up the Mississippi River toward the Great Lakes. If not stopped, they will threaten the biological integrity of the Great Lakes, which in turn threatens food and water resources, recreation and jobs. Fish markets in Canadian cities sell live Asian Carp. Without a law to stop live fish from entering Canada, the escape of fish is only a matter of time. [More information...]

Jan/03: The U.S. Coast Guard is finally testing the new DSC marine distress system to be complete in 2006, when Channel 70 will be officially monitored for digital distress calls instead of voice calls on Channel 16. Rescue 21 is the name of the new system, will cover all U.S. coastlines to 20 miles from shore, the Great Lakes and Western rivers, Pruerto Rico, Hawaii, Guam, and Alaska. The new system will enable fast identification and location of vessels sending a distress call. (BoatUS.com/mmsi)

Jan/03: The Canadian Coast Guare has announced plans to make the tests for the Pleasure Craft Operator Card (PCOC) more difficult due to complaints about the easy tests given to people challenging the exam. The original program was supposed to turn out more educated boaters, but the current situation allows people to get a card, good for life, without taking a single class. Companies authorized by the federal government to test people have allowed people to pass their test before paying, and even allowing them to try a second time. (PCOC)

Feb/03: The Marina Operators Association of Ontario is forging ahead with a voluntary program to rate marinas for a comprehensive list of ecological practices, then rating them. How does your marina rate? (705-326-9359 Robert.eaton@sympatico.ca)

Derek Hatfield in Around Alone Race

Jan/03: Canadian sailor Derek Hatfield in the yacht Spirit of Canada has been very competitive in the single-handed around the world race. (www.SpiritofCanada.net)

Jan/03: The U.S. Coast Guard and Federal Communications Commission has learned that certain active marine television antennas are causing GPS navigation systems up to 2000 feet (0.6 km) away to malfunction. If turning off the power to the antenna results in changes to your GPS receiver performance, the antenna may be the source of interference. In that case , you should contact the manufacturer of the antenna immediately. Antennae models identified so far for interference are the following: TDP Electronics Mini State Electronic Amplified TV antenna models 5MS740, 5MS750, 5MS921, Radio Shack Long Range amplified omni directional TV antenna Model 15-1624, Shakespeare Corp. SeaWatch Models 2030, 2050.

Jan/02: Petroleum Equipment Institute researched 150 cases of fires caused by static at gas pumps (fuelling cars). Some of the results were surprising. Nearly all of the drivers were women and nearly all fires resulted from getting back into the vehicle while the nozzle was still pumping gas. When they returned to pull the nozzle out, fire started as a result of static electicity discharge igniting the gas fumes from the full tank. Most of the women had on rubber-soled shoes which also could explain why the static charge was not dissipated to the ground. [Procedures for safe fuelling of gasoline in boats]


TRIVIA: Alexander Graham Bell wanted telephone users to say "Ahoy" when they picked up the receiver to answer the phone. Why didn't boaters (at least) stick with that one!!