Trent Severn Waterway is a National Historic Site of Canada 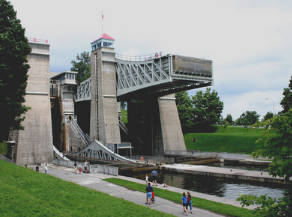 The Trent-Severn is an operational canal linking Lake Ontario to Georgian Bay in Lake Huron. The waterway is 386 km long, with 45 locks, and 15 swing bridges.

Originally built between 1833 to 1920 to carry commercial shipping, the Waterway is now a major centre of tourism and recreational boating, as well as a source of hydroelectric energy and community water.

The south end of the Waterway begins at Trenton, Ontario, located at the western end of the Quinte area, a protected cruising area from Kingston to the Murray Canal (leading into Lake Ontario).

Sailors who wish to transit the Trent Severn Waterway must take their mast down, and make sure of water depths before beginning their journey. The waterway winds though lakes, rivers, canals, locks, and even a marine lift at Peterborough (see photo above). The waterway is a shortcut to Georgian Bay, instead of cruising through Lakes Ontario, Erie and Huron. Read a letter from a happy Trent Canal tourist (1997).