"Have paddles, will travel"

In a kayak, carrying all his worldly possessions in a backpack, Jayson Ambrose will take the leap to paddle the Great Loop this fall.

The 12,000-kilometre trip will begin and end in the Gulf of Mexico. The Great Loop will take Ambrose, a born-and-raised Winnipegger who calls himself a minimalist, on an epic journey for 15 months. 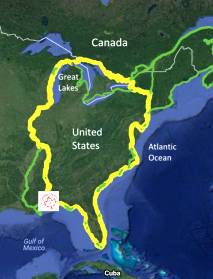 The Great Loop, a famous route among paddling, sailing and boating enthusiasts, is a multitude of connecting waterways through which Ambrose will paddle his kayak. {The following is a correction to the published article.} The journey will start in Mobile, Alabama, heading east around Florida, then north in the Intracoastal Waterway to Georgia, South Carolina, North Carolina, Virginia, Maryland, New Jersey, New York, up the Hudson River and NYS Canal system to Lake Ontario, the Trent-Severan Waterway to Georgian Bay, then south through Lake Michigan to Chicago, and the rivers in Illinois, Kentucky, Tennessee, and Mississippi (Mississippi River, Tennissee-Tombigbee Waterway), back to Alabama.

With no support crew or assistants, the 45-year-old will camp in a tent along the way and replenish his supplies at shops in the many harbours he will encounter as he travels. He will take time to connect with people in those stops, visit historic sights or just sleep on a beach.

"There's so many reasons why I want to do this. It's not just one reason. I love travelling, I love meeting people and I love adventure. I want to see so much and do so much and I had to figure out how can I do this the cheapest way possible," the 5-foot-11, 200-pound Ambrose said, noting a kayak is a "dirt cheap" mode of travel and efficient to manoeuvre. "This is more than your average two-week vacation. Fifteen months is what it's going to end up being."

Ambrose said lengthy stretches of being alone, especially at night, will be the biggest challenge but he's up for it. He said the longest leg of the journey will be when he reaches Canada and travels along Lake Erie where there will be few places to stop and possibly no people.

"Night time is going to be the loneliest time so emotionally, that's going to be the hardest time," Ambrose said. "I'll have these wonderful memories, all these amazing adventures of meeting people throughout the day but at night time I will have nobody to share it with. But, I've experienced that in the past so I'm expecting it."

A few years ago, Ambrose said he decided to change his life so he retired early after 22 years in a high stress and often dangerous career. He moved just over two years ago to B.C. where he's been working as a motorcycle mechanic in the Greater Vancouver area and taking himself on motorcycle and kayak adventures.

"My mom passed away when she was only 54 years old. She never got to enjoy the fruits of her labour. She worked so hard. She was trying to save up. She and my dad raised four boys. Over the years, that's affected me," Ambrose said. "I was working but I was doing the same thing my mom did. I wanted to live life. I wanted to go exploring, so I took early retirement."

This will be his biggest and longest paddling adventure.

His goal is to become the first Canadian to complete the Great Loop in a kayak.

Paddle Canada, the sport's Canadian governing body, told him its records show no Canadian paddling a kayak has even attempted the Great Loop.

"This is a big surprise to me, I had no idea I would be the first," said Ambrose, who has booked his flight. He'll fly from Vancouver to Mobile, Ala where he will launch his journey on Oct. 1 from the 5 Rivers Delta Resource Centre. "I'm excited to get started."

His research found other Canadians and Americans who have attempted and completed the Great Loop by canoe, power boats and sailboats, and an American kayaker who is in the midst of the journey right now.

Ambrose said he plans to move back to Winnipeg after he completes this kayak adventure.

Originally published in the Winnipeg Free Press (09-3-2016)
Jayson didn't complete his voyage, and now lives in Winnipeg.
www.onecanadiansjourney.com – Facebook.
"Go small - but go" - Lynn and Larry Pardey, world-famous cruisers
Paddling hint: To prevent wear on paddle and gunwale, wrap the wear point of the paddle shaft with hockey tape and coat it with Ice Wax (blade wax). How Canadian is that?!