General Information:
The 1000 Islands lie in the St. Lawrence River, running along the Canada/U.S. border from Kingston, Ontario to Brockville, Ontario, a distance of about 80 km (50m). At Kingston, the river is about 24 km. wide (15 mi) and only 1.6 km. (1 mi) wide at Brockville.

The Thousand Islands National Park contains 19 island properties. The actual number of islands in this area is closer to two thousand - the official count of islands in this area is 1,793. (To count as one of the 1000 Islands, an island has to be larger than one square foot, remain above the water level year-round, and support at least one living tree.) A dry year with low water levels can cause islands to appear, and of course causing other rocks to contact more boat bottoms. Charts are quite important here!

Remember to stay out of the path of all ships, including tour boats. Ships are any vessel over 20 metres (66 ft). Brush up on the "Rules of the Road".

The islands are located in the Frontenac Arch Biosphere Reserve. It is the second most biodiverse area in all of Canada, with over 250 species of birds, 53 mammals, 17 amphibians, 15 snakes and 98 species of fish observed.

This area has been listed as one of the best cruising areas in the world, with protected anchorages, beaches, fishing, tour boats, riverside towns, campgrounds, and other parks in the American islands. The St. Lawrence River is usually too cold for swimming until July (unless you are a kid of course). Check current rules about border reporting requirements if you are boating in waters containing an invisible border with the U.S. - you never know when you might have to go there in bad weather or an emergency!

The Thousand Islands National Park (www.pc.gc.ca/en/pn-np/on/1000) is a sub-group of 19 island properties in the Canadian river that is managed by Parks Canada. It was called St. Lawrence Islands Park prior to 2013. The park headquarters at Mallorytown Landing can be reached by the Thousand Islands Parkway. [map]

Some years ago, the 'Rhinoseros Party' promised to ban winter, breed mosquitoes to hatch in January so "the little buggers will freeze to death", and count the Thousand Islands to make sure none was missing! (I'm sure a few boaters considered voting for that!)

Visit by car:
Drive here from the U.S. by ferry at Cape Vincent, NY, or cross the Thousand Island Bridge near Clayton, NY, or the International Bridge at Ogdenburg, NY. The Thousand Island Parkway curves beside the St. Lawrence River just west of Brockville to Gananoque, home of the Thousand Islands Playhouse. Brockville is a large town at the eastern end (toll-free 1-888-251-7676) and Kingston at the western end of the National Park. Mallorytown Landing, with visitor centre, is the only shoreside part of the national park; the rest are only accessible by boat.

Thousand Islands bike path:
Beside the road is a 37 kilometre bikeway for cyclists, joggers, walkers, and roller-bladers. There are campgrounds, marinas, resorts, restaurants, and scenic stops along the way - bring a camera, bathing suit and bug repellant. The north-east section is more rural, the south-west has more ammenities. [MAP]

Lake Ontario:
In 2007, the Canadian Coast Guard station in Kingston received about 80 calls from late March to mid-December. Be sure to check weather forecasts, safety equipment and leave a sail plan with someone before you start out on Lake Ontario. The eastern end of the Lake is famous for weather changes, which can quickly create large chop and waves in heavy winds. Even in Quinte, it's considered wise to reef before you eat lunch to save a scramble when the afternoon SW winds pipe up.

Ecology:
There is poison ivy in the island, beside trails it's usually marked with signs or yellow tape.

Raccoons are common so don't leave out any food to attract them - they have been known to get into boats through velcro and even zippers!

Bald Eagles are slowly returning to the islands - there were none in the area from 1937 to 1998, but an estimated 100 birds now winter on the St. Lawrence River, eastern Lake Ontario. (birdscanada.org) There's a well known nest at the top of a tree on an island east of Mulcaster dock. Watch for osprey platforms around the islands - these are flat platform on top of tall poles or even nav light structures (Gananoque Narrows has one). From 1992 to 2007 ospreys increased from 2 pair to 100.

Hill Island has the largest stand of pitch pines in Canada - one of our rarest trees in Canada - deer eat the young trees so few survive.

Endymion and West Grenadier islands (and others) have another rare plant called the Deerberry bush - looks much like a blueberry bush without the sweet berries. Most of Endymion has been closed to visitors because of this plant. [People don't eat deerberry bushes, ironically, and deer don't read signs. In my observations over 30 years, closing trails, and removing facilities has not improved islands' ecology, just annoyed visitors. --Pat]

Park Statistics:
Half of visitors are from Ontario, a quarter from Quebec. Visitors spent an average 5.6 nights in the park. 27% completed the survey in French. 20% were first-time visitors. [Parks Canada news Spring 2008]

"Out on my River for a few hours today. Even though it was a rainy afternoon, ... there is no such thing as a bad day on the River. But even if there was, it's still better than a good day anywhere else." - Karolyn Massey (1000 Islands River Rats Now and Then) 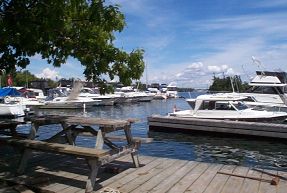 Thousand Islands National Park
, with only 9 square kilometres of total land area, is the smallest park in Canada with 21 islands and numerous islets. Most of the Park islands have docks, picnic tables, and walking paths which can only be reached by private boat or water taxi.

The St. Lawrence River doesn't warm up for swimming until July, except in shallow bays (10-year old kids don't care of course). Then you have great swimming until the end of September. Ontario boats requires holding tanks so no danger of sudden "discharges".

In 1535, Jacques Cartier was barred by the Lachine Rapids (in Mount Royal, now Montreal) from proceeding up the St. Lawrence River. It became a dream to build St. Lawrence Seaway from the Atlantic Ocean throughout the five Great Lakes to serve trade to Ontario and Quebec in Canada and New York, Pennsylvania, Illinois, Michigan, Ohio, Indiana, Wisconsin, Minnesota in the U.S.

Canada and the U.S. failed to agree for 30 years, mainly due to lobbying by powerful rail and industrial companies in the U.S. In 1895, the first joint U.S.-Canada commission was to study seaway feasibility. In 1909 an International Joint Commission was formed to look into the matter. In 1932, Canada and the U.S. signed the Great Lakes-St. Lawrence Deep Waterway Treaty, and in 1941, they signed the Great Lakes-St. Lawrence Basin Agreement. In 1949, another commission studied the idea, but again no progress was made in construction of the Seaway.

In 1951, Canada finally got tired of waiting after Washington shelved the joint project, and announced it planned to build the Seaway alone. Canada passed the St. Lawrence Seaway Authority Act and the International Rapids Power Development Act to begin work from Montreal west to the Lakes. The ploy worked, and the U.S. joined Canada in power works in the International Rapids section of the river - the first joint work on the Seaway.

In 1954, the United States joined Canada in building the Seaway with the passage of the Wiley-Dondeo Act. The agreement reached between the two countries estimated the cost of the project at $470.3 million, with Canada paying $336.5 million, and the U.S. paying $133.8 million.Canada's Prime Minister Louis St. Laurent started construction with an historic groundbreaking ceremony in Cornwall with Ontario Premier Leslie Frost and New York Governor Thomas E. Dewey.

The St. Lawrence Seaway was completed in 1959, officially opened by Queen Elizabeth II and U.S. President Dwight Eisenhower. The Seaway now serves some of North America's largest ports. Although a marvel of engineering, recent economic problems have been caused by a decline in shipping and invasive species like zebra mussel.

Statistics:
The Seaway system is connected by 6 canals with a total length about 100 km. The 19 locks are filled and emptied by gravity. Each lock is 233.5 metres long (766'), 24.4 metres wide (80') and 9.1 metres deep (30') at the entrance sill. Ships are raised more than 180 m. above sea level. In about 45 mintues, a lock fills with approximately 90 million litres of water. Channels are maintained at 8.2 m (27') minimum over chart datum. As for commerce, 3000 tankers cruise into and out of the Great Lakes each year via the St. Lawrence Seaway.

American visitors entering Canada must report to Canadian Customs & Immigration before they can legally stop at an park island or anchor in Canadian waters. You may phone from designated telephones at most marinas and town docks.

Entering the US, you will find that many towns have yellow immigration phones in special boxes equipped with two-way video terminal for interactive conversation with an immigration officer. Previously the captain had to check in before the crew could set foot on U.S. soil, but now your crew must accompeny you to be seen on camera and answer questions. Take your ship's papers and photo ID and any other papers required for everyone on board.

Landing at islands:
Boaters arriving from Canada to visit Potters Beach (Grindstone Island) or Waterston Park (near Ivy Lea) must report to U.S. Customs before landing or anchoring, unless they have an I-68 form (or NEXUS in some areas) and report their arrival (there are no phones at either location). Boats heading for the Thousand Islands Park must first check in with Canada Border Services - you may use phones located at most marinas. Check the latest regulations before you go.

Lyme Tick information is posted in the Thousand Islands National Park, since disease-carrying black-legged (deer) ticks were discovered in grassy areas of some of the islands. Lyme disease is caused by bacteria transmitted by the bite of an infected tick. Ticks are spreading throughout the islands by deer and other wildlife - and possibly visitors' dogs. Diagnosis can be difficult, but if not treated quickly, Lyme Disease can cause complications of the heart, nervous system or joints. Read more information about prevention, symptoms, treatment, and two tick-removal procedures: Lyme Disease.

"When I read about the evils of drinking, I gave up reading." ~ Henny Youngman
"To some it's a 6-pack. To me it's a support group. Salvation in a can!" ~ Dave Howell
"24 hours in a day, 24 beers in a case. Coincidence? I think not." ~ Stephen Wright
"Beer is proof that God loves us and wants us to be happy." ~ Benjamin Franklin

Links to other Sites