History of the Thousand Islands

The largest reservoir of fresh water in the world, the five Great Lakes between Canada and the US, flows through the St. Lawrence Seaway and the Thousand Islands on its way to the Gulf of St. Lawrence and the Atlantic Ocean. The natural beauty of the river winding around islands and islets with majestic wind-blown pines was made famous in paintings by the Group of Seven. 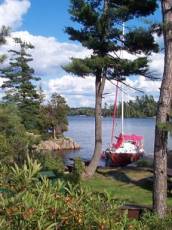 Iroquois tribes lived in this area before Europeans arrived. They called the area the "Garden of the Great Spirit" or "Manitonna". The various tribes - Mohawk, Oneida, Onondaga, Cayuga, Seneca - lived in long-houses, growing crops, hunting, and fishing the lakes and great river.

The first explorer to reach the Thousand Islands was Samuel de Champlain in the 1600's. (He was also involved in the naming of the river - see below.) Traders from England, France and the Netherlands soon followed to buy the excellent quality furs that the Indians brought them.

The French travelled mainly by canoe and were known as "voyageurs". Father Le Moyne, a Jesuit, built missions here in 1654 to get Indians to sell their furs to traders from France. The St. Lawrence became an important route for these "couriers de bois", who travelled by canoe to expand their trade farther west.

Indian wars began between the Iroquois, supported by the British, and the Ottawa and Huron tribes. The British were eager to establish a hold on the new continent and increase their fur trade. Indians and pirates attacked canoes and French boats laden with furs. The Seven Year's Was 1756-63) between England and France finally reached the new continent. Both sides built fortresses and outposts along the river and islands and fought fiercely for control of this new rich land. Britain won and what is now Canada became a British territory.

Many British "Loyalists" living in the eastern seaboard of the U.S. during the American War of Independence fled to Canada and the Thousand Islands region and created new British settlements. 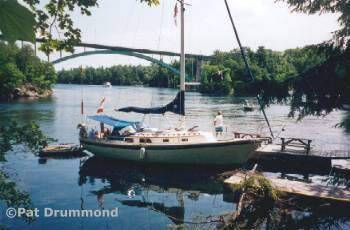 Once again the Napoleonic Wars in Europe spread to North America. The War of 1812 between Britain and the United States caused many actions in the Islands. You can see stone towers built to depend Canada in Kingston, Ontario and nearby Cedar Island still standing today. The Rideau Canal was built to provide a waterway bypassing the St. Lawrence to bring supplied from Montreal, but was never used. The treaty of Ghent settled the war and prohibits warships ever plying the waters of the St. Lawrence River.

You can relive some of the history of the 19th century during Pirate's Weekend at the Thousand Islands National Park headquarters. The infamous river pirate Bill Johnston was the first Admiral of the "1000 Islands Navy" during the Rebellion of Upper Canada.

Today most of the 1800 registered islands in this region are privately owned. There are Ontario provincial parks, New York State parks, 14 national island parks, castles such as  Jorstadt and Boldt Castle. Boat tours ply the waters around "Millionaires Row" - grand cottages from decades past when rum running and smuggling were the pastimes of this area.

This beautiful area was once listing in the Cruising World magazine as one of the ten best cruising areas in the world. Where else can you sail, paddle or motor, fish, visit a park island, swim, dock at a playhouse, play a round of golf, visit a castle, and stop for lunch at a restaurant? Where else can you anchor in water where you can see both the fish and your reflection?!

The St. Lawrence River drops 226 feet between Lake Ontario and Montreal, Quebec. To allow deep-draft ocean vessels to reach the Great Lakes, the St. Lawrence Seaway was built as an American-Canadian joint project between 1954 and 1959. The Seaway connects the head of the Gulf of St. Lawrence at the Atlantic Ocean to Duluth, Minnesota, 3,766 km (2,340 miles) away, through a complex system of lakes, rivers, deepened channels, locks, and canals. It had great geographic and economic importance to the entire Great Lakes basin in Canada and the United States.

In 1534, French explorer Jacques Cartier was spending the night on the north shore of an unknown body of water in the New World on August 10, the feast day of St. Lawrence. He named the waters after the famous martyr, now known as the Gulf of St. Lawrence. He called the river "the great river of Hochelaga" (Montreal). People assume the river had the same name, because the name was too long for the cartographers' maps, and the text spilled over into the adjoining river. Samuel de Champlain later renamed it the St. Lawrence River. The French used the name Rivière du Canada west to Montreal and north to Ottawa. The river led to the five Great Lakes and North America's interior.

In 250 AD, Spanish-born archdeacon Lawrence of Rome was roasted to death by order of the Emperor. He has since become the patron saint of librarians, cooks and butchers! St. Lawrence is a very popular saint in Rome, due to the atrocity of his death. As the story is told, Lawrence was ordered to appear before the Christian-hating Emperor Valerian, who had just killed the Pope and six deacons. Lawrence was ordered to reveal the location of all the riches of the Christian church in Rome and deliver them to the Emperor. Lawrence appeared, but instead of delivering bags of gold, he brought poor and disabled Christians, to whom he had given the money. "These are the treasures of the church," he is supposed to have said. He was roasted on a gridiron, a slow death - and is usually portrayed with one. He was later declared a martyr, and eventually a saint, by the church.

The night of Lawrence's execution, it was said the sky was lit by meteors. The Perseids streak across the sky about that date every year, and are now known as the "Tears of the St. Lawrence".

O holy Saint Lawrence, by God?s ardent love, you exhibited faithful service to the Church and its treasures - the poor and the sick - and then attained a glorious martyrdom.
Help us to love what you loved and to practice what you taught. Amen.

A 5-metre (14') 8 metric tonnes (18,000 lb.) white limestone statue of St. Lawrence is being placed 1 kilometre east of the Thousand Islands Bridge (Ivy Lea International Bridge) on the Canadian Palisades, a long cliff that runs under the Canadian shoreline. It will be visible only to boaters on the river.

The statue's sculptor, Jim Smith, of Campbell Monuments in Belleville, said they wanted to convey the saint's character and story through symbolism in the statue. St. Lawrence holds a gridiron, the device used to execute him, in one hand, and a book in the other, as he was a church librarian. Lawrence stands on bags of coins, representing his role as keeper of the Roman church's money, which he gave to the poor.

Aug/07: Almost the entire cost of the statue was paid for by private residents. A citizens group, the "Thousand Islands Admirals Incorporated", is still raising money for the base and installation.)