It won't hurt you. Really.

In fact, the black rat snake doesn't even bite. But we are killing them off in Eastern Ontario with our cars. Biologists are trying to save the species from elimination in this area, but, as David Gonczol writes, motorists mistake them for pieces of tire, and don't even try to slow down to miss them. 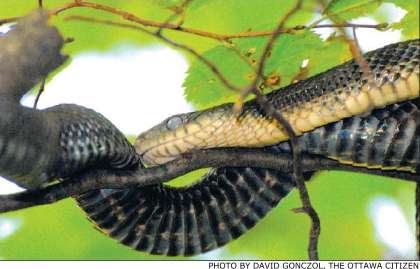 OTTAWA - Don't look now, but there's a monster serpent slithering through our neck of the woods.

The three-metre-long black rat snake has been dangling from our trees all this time, but you'll only find one by accident, the way Vars resident Susan Dolan did.

Mrs. Dolan was enjoying a perfect summer day by the water a few years ago, soaking up the sun on a large rock by Charleston Lake, when she opened her eyes and realized the largest snake she had ever seen was sharing her real estate. There was yet another long black sun-worshipper on her other side.

"I don't know if panic describes what happened.

"I just remember trying to stand up and running up the shore and jumping up on a picnic table. I was hyperventilating, and I tried to tell my husband to get out of the water, but I couldn't talk," she recalls.

"The only word that I could get out was 'snake'."

Mrs. Dolan was like most people in Eastern Ontario, in that she was unaware this timid giant is among us.

Sadly, it likely won't be here for long, because Canada's largest snake is making a seemingly futile last stand south of Ottawa that will likely end with its disappearance sometime this century.

Biologists working to save the reptile are focusing their efforts on 5,000 square kilometres in the area of Charleston Lake, northeast of Gananoque, and up to about Smiths Falls.

The snake rarely ventures north of Highway 7, which makes sense because the species' demise is largely due to highway traffic.

Gabriel Blouin-Demers, an associate professor in the department of biology at the University of Ottawa, is the leading authority on rat snakes in Canada, and the only one doing academic research on them.

The snake-hunter has been stalking the Eastern Ontario bush since 1996, estimating the snakes' population, detailing their habitat, habits, reproduction and how far they travel.

He is convinced that a steady decline in the rat snake population will only stop when the number of snakes killed on roads is stopped or, at least, reduced. Motorists fail to recognize that what looks like a piece of blown tire is really a long and lumbering snake simply trying to cross the road.

"Because they are so big, they don't fit between the wheels, and they get smucked on the roads," said Mr. Blouin-Demers.

"It's not that many per year, but this is an animal that lives about 20 years and takes 10 to mature, so adult survivorship is really the key (to saving the snake)," he said.

"As soon as you start killing adult individuals, especially females, it doesn't take long before you are making a big dent in the population."

The black rat snake may be an intimidating-looking creature, but it has no venom, tiny teeth that can barely puncture the skin, and a small mouth that keeps the constrictor's menu options down to small portions.

Unlike some tropical constrictors that can swallow large animals or even humans, this northern serpent spends most of its life lounging in trees digesting meals like young rabbits, mice and birds. In typical Canadian fashion, it's considered a well-mannered beast that often will not bite even when picked up in the wild.

Eastern Ontario is the northernmost edge of its range, which extends south to Florida and west to Kansas.

Mr. Blouin-Demers says there is as much road carnage south of the U.S. border, but the warmer climate and shorter winters there encourage annual reproduction.

"The demography is very different there because of the climate. So things here are challenging and, as soon as you start adding additional stresses like road mortality, it doesn't take much before that just pushes them over the edge."

The number of snakes left in Eastern Ontario is difficult to estimate. Mr. Blouin-Demers does his work at the Queen's University biological station, near Chaffeys Locks on Lake Opinicon. It is estimated there are about 500 adult black rat snakes within the station's 30 square kilometres.

But that "premium habitat" is different from the rest of the 5,000-square-kilometre distribution area, largely because it is free of roads and cars.

Although the demise of one snake species is not going to cause the region's ecosystem to collapse, the fragile condition of this snake is saying something about the state of the regional environment.

"This snake is not a top predator. It is not a keystone species. Ecosystems will not collapse if this thing goes.

"However, it is a sensitive species. So we may say that if this snake is going, that means that the ecosystem that is associated with that species is not doing very well. They are not the only thing getting smushed on the roads, so it's an early warning that things are on the way down."

The agency that designates endangered species in Canada, the Committee on the Status of Endangered Wildlife in Canada (COSEWIC), listed the black rat snake as a threatened species in 1998. This designation means the snakes are likely to become endangered in Canada if the factors affecting their vulnerability are not reversed. The designation also put into motion a recovery plan.

A combination of government, academic and private-sector experts formed a committee to conduct research and take action to save the snake.

Mr. Blouin-Demers said the first thing they did was study rat snake population trends, which was funded by Parks Canada. He and others, including ecologists at the Thousand Islands National Park, near Gananoque, found as many of the snakes as they could, implanted them with radio transmitters, and tracked them to their winter hibernation sites.

It took years of tracking, catching and releasing to discover the population decline.

Population tracking continues to determine if recovery efforts like artificial nesting sites are having a positive impact. With the loss of habitat and fewer natural nesting sites, researchers tried an experiment with artificial nesting "boxes." After a few years of failure, the boxes were set aside and researchers changed direction after hearing reports from nearby cottagers of snakes nesting on their properties.

"Many snakes nest in leaf piles that cottagers have been building for the past 20 years or so with a big layer of compost at the bottom. Snakes really like that, so our idea was to reproduce that," said Mr. Blouin-Demers. So far, six snakes have nested and produced young in the artificial leaf piles.

It appears that not much can be done about the roadkill that is at the heart of the snake's demise, except to ask motorists to be vigilant and not hit them. Putting up signs indicating snake crossings doesn't seem to work.

"There has been some signage for Massasauga rattlesnakes in the Bruce Peninsula.  But, to be honest, they are nice signs and it's a nice effort, but they don't make a difference.

"Studies have been done and people don't slow down for these signs."

Parks Canada has also been doing outreach work with residents in the area to discourage them from killing the snakes, but there are "crazy" folktales still making the rounds, including the story of a rat snake that ate a calf and another that said the snakes will drag children as old as six into the woods.

"There are a lot of unfounded and unrealistic fears about rat snakes, and so many people think they are really dangerous.

"There is still a fair number of people that cannot be convinced they are harmless and will whack them on the head every time they can," said Mr. Blouin-Demers.

Melissa Francis works as a snake tracker with Parks Canada at Thousand Islands National Park, and once had a large black rat snake constrict around her arm after she found it on the road and was moving it to a safer place.

"It hurt a bit, but it wasn't anything serious. It hurts more when they bite you, but only because you're not supposed to pull away because it will tear your skin. But I can't do that yet," she said.

Ms. Francis spent her job interview thinking about how she didn't even like snakes. Now she goes happily into the woods each day looking for two snakes she's fondly nicknamed Bridgett and Landon.

Josh Ven Wieren, the park ecologist at St Lawrence Islands National Park, said part of the park's mandate is to try to save threatened and endangered species. When the park expanded three years ago from Hill Island to two nearby mainland properties with relatively large populations of black rat snakes, Ms. Francis was hired to find them.

"We capture them, do a little surgery (implanting radio transmitters) and then we do some radio tracking in the spring, summer and early fall,  just to see what their home range is and what parts of the property and other people's property they are using. In the winter, we can find out where they are hibernating so we can find more hibernation sites."

As the snakes settle in for their long winter hibernation, researchers like Mr. Blouin-Demers roll up their sleeves to study weather data to see if climate change is going to help the snakes. Climate information will be put beside population numbers over the long term to see if a warming climate is just what the snake needs to continue its stay in Canada.

"Global warming is going to be bad for a lot of things but, for reptiles here, it could be a good thing because just about all the reptiles we have, except for a couple of snakes like the Massasauga rattler and fox snake, are basically U.S. species that just make it into Canada. They would probably do better under a warmer climate."

It will be years before we know if climate change will rescue Canada's largest snake.