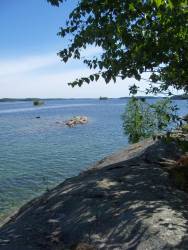 There are many places to anchor the for the day, so I will just mention a few favorite overnight anchorages. There are good places to anchor if the docks are full. Leek (Thwartway) Island has moorings in its small south bay, but you can anchor. Boats take a line ashore to limit their swing when it gets crowded. Many boats anchor east of the island, but be sure to set an anchor light as it is near a route boats take at night to Gananoque. (A friend of mine had a runabout and ice cubes land on his deck here one evening!)

Anchoring in the islands near Gananoque usually means weeds and mud. Farther east toward Rockport, you might anchor in deeper water with rock and weed. Nearly all anchorages can be tricky in a thunderstorm - I know people who swear they will never do it again! YMMV.

Brakey Bay in the "Forty Acres" south of Howe Island is a favorite of sailors. It is close to park islands and marinas around Gananoque. There is anchoring room north-east of Beaurivage Island if you don't mind the wakes from the busy channel. South of this island by Wanderers Channel is quieter, with more room to swing, but exposed to strong prevailing winds. Be prepared to leave if you plan to anchor overnight. 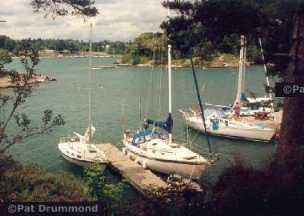 South of Endymion Island is the best anchorage with 7 moorings (fee). Wakes from the passing boats can be a problem, as always. If you anchor, stay well clear of boats on moorings - they don't "swing" on a wind shift but you will. A small day fee allows you to use shore facilities. Recent changes to protect flora and fauna have resulted in removal of many docks, camp-sites and trails in this lovely park. Even garbage can are becoming extinct.

Camelot has moorings beside the channel on the north side. The mooring buoys inside the south-west bay are popular. The bay is nicknamed "Hotel California" because "you can check out anytime you like, but you can never leave." Keel and props often touch the rocks, especially when leaving, since the sun is often in the skipper's eyes. We passed west of the plastic bottle in the entrance with a 5-ft. draft in August - probably we were just lucky.

West of Mulcaster Island is a nice bay, but it is getting more crowded every year. There are rocks to miss approaching Mulcaster, before you turn to port (west) along the shore until it opens up into a bay in the middle of a group of islands. There are spots with weeds and those without - I'll let you find them! You can also anchor east of the island's main dock - it's exposed to wakes, but is a nice day anchorage.

How to anchor - thunderstorms can pull an anchor set in fine sunny weather. If you are well set with heavy gear, you are more likely to survive gusty winds in summer thunderstorms. If you plan to sleep on the anchor, set up an anchor watch or a 'drag' alarm. High-tech is a GPS alarm; low-tech is a dinghy anchor fastened loosely to a metal pan on the edge of a counter (also fastened to the boat!).

Time is like a river. You cannot touch the same water twice, because the flow that has passed will never pass again. Enjoy every moment of your life. - unknown

OK, I know you can swim almost everywhere. Still, there are a few special places with beaches. Favorite swimming spots include Central Grenadier, where families and groups go for the camping as well as the beach. Lots of park docks here, but you can anchor off the beach for the day. For the shallow-draft boats, you shouldn't miss the action in Lake of the Isles - this is the place to people watch on a hot weekend afternoon. Potter's Beach is another spot for people-watching and swimming. It is opposite Leek Island, south of the channel. Check your chart for rocks before you venture in so you don't cut any corners. The marinas do a lot of towing and prop repair in the summer!

For over 50 years, Half Moon Bay on Bostwick Island has welcomed visitors to worship services on Sundays afternoons at 4:30 during the summer. Arrive early to listen to 15 minutes of music. Mostly small boats or dinghies anchor in the beautiful natural rock bay to sing hymns and listen to guest speakers in the non-denominational services.

Half Moon Bay is on the south-east end of Bostwick Island in the Admiralty Island group about 2.5 km (1.5 miles) southwest from Gananoque. If your boat draws more than 3 feet, stay in the centre of the bay as it is shallow. Call 659-4130 is you would like to request transport on a volunteer's boat.

Pronouced gan-a-NAW'-cway, and "Gan" for short, this town has a waterfront with shops, food and art. Boaters should watch for the cruise ships that are longer than 20m and have the "right of way" over all smaller vessels, sailing or not! Gan. Municipal Marina (613-382-4088) has visitor docking and allows boats and dinghies to dock free for a few hours for shopping. There is a shuttle to the grocery store. Islanders come "to town" by boat to shop, as do boaters visiting the park. Most marinas have a checkin sign with the toll-free phone number to phone Canadian Customs. If you stay longer, don't miss the Thousand Islands Boat Museum beside the docks used by the large Thousand Islands tour boats. [gananoque.com]

A favorite boat trip is from Endymion Island to Mermaid Island using the back channels. Go west to Leek Island (Thwartway), and turn north to pass Leek's east side. You meander along the west side of the Huckleberry Islands (watch for rock markers here). On a normal south-west wind, this is the only wavy spot. You will notice on your left red and green spar buoys coming from the "Forty Acres" as you continue on the route between islands that leads to Gananoque. As you approach the end of the island chain, Wanderer's Channel branches to the west and takes you between a number of islands to Mermaid Island. Watch for a rock marker that appears to be in the middle of the channel and be sure to pass to the south! You will pass another park island with docks, Macdonald Island, about mid-way. Don't be surprised if you meet the tour boat in this narrow channel! Just slow down and stay as far to the edge of the channel as you can safely go.

If you are in towns, pick up a copy of the free newspapers - they are filled with hundreds of events, festivals, and information on fishing derbies, poker-runs, and ships.

Many riverside communities have fireworks with hundreds of boats anchor nearby to watch. Be sure to use an anchor light! A few days later, July 4 is celebrated on the American side of the river (Alexandria Bay and Clayton are both spectacular).

Most towns have popular river festivals during the summer and several have naval re-enactments and boat races. Check out the boating events list.

Located in Gananoque, it offers performances all summer with docking right in front. Charles Haines, Shakespearean professor, called this century old boathouse "the most charming theatre in Canada". Kingston has waterfront concerts all summer, the Grand Theatre and all the entertainment of a university town.

The restored castle and boat house is across from Alexandria Bay, NY. This is an impressive place to visit, either in your own boat or a tour boat. Tour boats go from Gananoque. There is a customs agent on the island if you are coming from the Canadian side.

Battles, ships and races are the specialty at Belleville, Mallorytown Landing and Kingston during the summer.

The original Thousand Islands dressing recipe was developed by the wife of a Clayton fishing guide, who served it to his fishing party during a shore-side dinner. She later shared the recipe with the Thousand Islands Inn, where it's still the house dressing.

Golf in the Islands