About the Thousand Islands Park 2002

June 25, 2002: The Thousand Islands National Park has changed. While prices have increased dramatically, facilities and access to the islands are disappearing at an alarming rate. Docks, garbage cans, campsites, wells, fireplaces and shelters have been removed; paths have been closed. On Leek Island the outhouse was removed and path no longer maintained. A well-used shelter on Gordon Island was torn down.

After arriving at and paying the high fees, visitors discover the Park has removed most facilities including the wonderful "stone stove" at the east dock at Endymion, where people used to have a fish-fry - very much an historical activity.

We asked why. Park employees say the island is "overused". What nonsense! After campsites were removed, they returned to a natural state in two years. The north side is blocked by huge trees brought down by a 1995 storm. Most people walked the wide chipped path created by the park. The rare deerberry bush is carefully protected from humans but not animals or birds.

Many problems including overuse would disappear if those who didn't pay were fined. I knew a boater who regularly anchored and swam ashore in the mistaken belief this exempted him. We watched a cottager arrive and dump a dozen bags (yes 12) of garbage - while a Park Warden watched! Anchored and moored boaters rarely pay when they went ashore. Tying a line to an island is a gray area, but a little education and a few fines could have solved this problem as well. 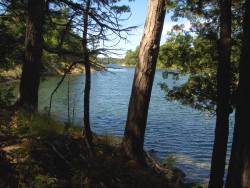 At Endymion Island only moorings and 2 docks at the east end remain. The south dock has been 'disconnected' from shore and you must go to the dinghy dock to pay a mooring fee. A day fee is required to walk on the islands - unless you pay for a mooring or dock (although, most of Endymion is 'off limits'). There is a fine if you get caught north or west of the dinghy dock. Those who buy a Seasonal Pass have the option to pay extra for a dinghy pass to access park 'facilities'. I find it insulting that my season's pass doesn't allow access from an anchor or mooring. I certainly don't need to pay extra if the boat is on a dock. The rule-makers should rethink this one.

I nearly gave up visiting the islands after running generators at the dock began to happen regularly. The Park recently banned running of motors and generators on many islands, but people insist "they have to run their engine". I think engines and generators have no place in a national park. I hate over-regulation, but either supply electric plugins or ban engines throughout. I've heard stories about dust-ups over engines running on docks. I personally heard people yelling between moorings over a generator at 10:30 pm. In 2006, a yacht at Camelot started the gennie at 5 in the morning. Sure, rules - but what if his sleeping family had died from monoxide poisoning!

Too bad park staff don't enforce park regulations with fines. The result is that rules are routinely ignored: generators run between 10 pm and 8 am, boats over 12 m. (40') on moorings, boats tied to trees, walking or dumping garbage without paying a day fee, not paying for docking and mooring, open fires on the island... and that was just one week.

An important part of the heritage of the islands are the decades of use by fishermen and boaters -- fast disappearing. Once shelters and board walks are removed or allowed to rot, they are gone for good. Only photos will remain of the human "history" of the islands. Only a fraction of the docks and camps in use 20 years ago remain. We've been watching the park being returned to a natural state, but removing "access" for future generations is going too far.

The balanced use of islands seems to have gone missing. The rare deerberry is given priority over people, and is the reason for most of Endymion being closed. There are patches of these "rare" plants on two park islands so they probably exist on many private islands as well (it's difficult to identify). If they thrived all these years beside pathways, removing the paths could even cause them to die out. (Hey, I'm entitled to my theory too!)

I see nothing "natural" about paying a park naturalist to plant and water a pitch pine, or building a path, and adding wood stairways on every hill. Park plans to return the islands to their natural state seems a good idea on the surface, but how practical is it when surrounded by thousands of islanders, boaters, residents and tourists? Unfortunately, the waterfront communities are more interested in getting you to visit the newest casino or bar than in sitting on an island listening to loons.