Northwest Passage in the Canadian Arctic 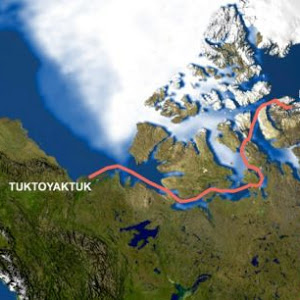 Full transit through the Northwest Passage is through several routes through the Canadian Arctic Archipelago between the Baffin Bay in the east and the Beaufort Sea in the west. It offers a significant shortcut for vessels travelling between Asia and Europe or North America.

As more sea ice melts, more small boats are making passages to the Arctic. Boats still have to deal with storms, ice jams, polar bears, hypothermia and dealing with emergencies. The North is one of the most dangerous areas of the world because help is still far away.

Northern Canada Vessel Traffic Services Zone (NORDREG) tracks pleasure craft through the Northwest passage. Most vessels under 300 gross tons, such as Issuma, aren't required to file a trip plan and may not be included in the count. According to Sail-World.com (Feb/2013), only 135 vessels have transitted the Northwest Passage since records began.

The first explorer to conquer the Northwest Passage by sail was the Norwegian explorer Roald Amundsen. He sailed in a converted herring boat called Gj?a between 1903 and 1906. In 1984, the commercial passenger vessel MS Explorer became the first cruise ship to navigate the Northwest Passage. In 1986-87, Jeff MacInnis and Mike Beedell were the first to sail the passage in an 5.5 metre (18-ft) catamaran called Perception.

In 2012, a solo sailor in a 27-foot fiberglass sailboat was one of 18 private yachts to sail the Northwest Passage. Richard Husdon, aboard sailboat Issuma, was the 151st boat through the passage. (Reported by sail-world.com) By August 29, 2012, 31 ft. sailboat Belzebub captained by Canadian Nicolas Peissel, made the first-ever passage though McClure Strait by a sailboat, aided by Ice Services Canada. [news Aug.31/2012] In September 2012, a 660-ft. ship carrying 481 passengers completed a 26-day passage of 8,900 km (5,500 m).

In 2013, Irish adventurers Kevin Vallely, Paul Gleeson, Denis Barnett and a Canadian, Frank Wolf, rowed nearly 1,900-kilometre in an attempt to to be the first to cross the 3,000-km Northwest Passage from Inuvik to Pond Inlet [map] by human power in one season. [canadiangeographic.ca] A number of kayak passages have been completed, but over multiple seasons.

In 2013, the first commercial bulk carrier MS Nordic Orion transitted the Northwest Passage enroute from Vancouver to Finland. In 2016, the largest ship through the Passage was the cruise liner Crystal Serenity (photo), gross tonnage 69,000 with 1,500 passengers and crew.

2017: 31 ships made a transit through the Northwest Passage. Transport Canada implemented the international Polar Code in new regulations for ships operating within Canadian Arctic waters.

2018: 5 ships made a transit through the Northwest Passage. (Canadian Coast Guard)

From 2013 to 2019, the number of ships sailing in Northwest Passage waters increased by 44%, from 112 to 160 unique vessels. More dramatic, distance ships traveled more than doubled - from 2,980 nautical miles to 6,170 nautical miles.
- report by Protection of the Arctic Marine Environment working group (PAME)