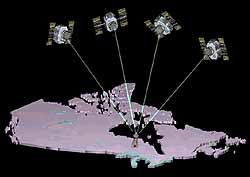 The GPS (Global Positioning System) is a worldwide radio-navigation system that operates using a network of satellites and monitoring stations. A marine GPS receiver can calculate where you are on (or even above) the earth to within 30m (98?). The Canadian Coast Guard supplies a differential GPS that provides accuracy to within 10 m (32?10?). Buy a marine GPS not an automotive GPS to get the information you need on the water.

GPS uses a system of orbiting U.S. satellites to determine location. In 2000, accuracy was improved to 10-20 metres making it dependable for use by civilians. (In 2005 there were 29 Block II satellites.) Around the world, boaters, aviators, surveyors, Internet and cellular communications all rely on this global navigational system, but it depends on a satellite network operated entirely by the U.S. government. (Current Status of GPS satellites US Coast Guard Navigation: GPS USNO Time Service)

It should be stressed that charts may NOT be accurate, depending on the age and type of data they are based on. You should be aware of possible errors when plotting GPS locations on charts. Areas where ships do not go or inland water charts may be based on old inaccurate data.

Differential GPS (DGPS) will correct for errors where it is installed on shore. Beacons have been established near shipping routes and harbours in Canada. To use the beacons you must buy a special DGPS receiver at considerable extra cost to correct the location to an accuracy within 10 metres instead of 100 metres. A DGPS receiver connects to a "DGPS-ready" receiver you already have. This system is less attractive since the improvement in GPS and WAAS, the newest satellite system.

Loran-C was going to be phased out by the year 2007. In 1998, the U.S. decided to extend Loran system instead. After $100 million in improvements, the new system will support combined Loran-C/GPS receivers that provide superior navigation accuracy than either system alone, plus heading data even when your boat is not moving!

As of September 1997, all eight stations of the 26 year-old OMEGA Navigation System terminated. Users must no longer depend on OMEGA broadcasts for navigation of any kind.

ECDIS (Electronic Chart Display Information Systems) is another development to help navigator's find their way. It combines special electronic charts with onboard navigation systems, such as GPS, autopilots and computers.

TIP: Make the centre of the compass rose on the map a waypoint in your GPS. A simple GOTO will give you bearing and distance to this compass rose. With a ruler or a little piece of rope or your fingers you can determine your position.

"On 21 August 1999 (GPS Rollover Week), some GPS receivers had an internal date problem that could cause incorrect calculation of locations. Some GPS receivers may claim wrong locations in addition to incorrect dates! Check with the dealer to see if there is a software upgrade. Unfortunately, some older GPS units will not operate after August 1999.

Check with the manufacturer of your unit with your model and serial number for information about any software or hardware upgrades. If you have a questions about particular brand of receiver, search google.com for newsgroups that discuss GPS receivers.

GPS is a navigational system using satellites in space to transmit signals, ground control stations, and GPS receivers to receive the signals and deterine geographical location.

The goal of the system is to provide for at least 95% probability that at least 4 satellites will be above the minimum altitude required for good reception at any time at any place on earth. To achieve this, there are 24+ satellites. Each satellite transmits its precise location and the time of transmission. A GPS receiver measures the interval between the transmission time as sent and the time it was received to determine the distance between the receiver and the satellite.

Three such distances from three different satellites are required to determine your location on the surface of the earth. One satellite distance determines that the receiver is somewhere on the perimeter of a circle on the earth's surface (or a sphere in space if you are interested in where you are in the sky!). Three such distances will create an intersection of the 3 spheres, which determines your position plus your alititude if you're a pilot or mountain climber.

The satellites transmit 2 codes: the U.S. military code (PPS) which is extremely accurate, and the public code (SPS), which is accurate to 25 metres. The U.S. military previously used what is known as selective availability (SA) before May 2000, the injection of random error to the SPS code to reduce the position accuracy. This error rarely exceeded 100 metres but could be as high as a quarter of a nautical mile! [see news above on changes to SA]

Multi-channel receivers and faster processors will give more accurate positions but use more power. For a hand-held, this means shorter battery life (12-volt connections or charging is a good idea). The antenna position is also critical because you need to be able to receive at least 4 satellite signals simultaneously in order to get a "fix", and they need to be widely spaced to get the best accuracy. This can be challenging for newer flat "patch" antennas, which are not as good as other in picking up satellites near the horizon. Most do not work well under cabin tops or canvas frames either.

Some of the available functions:

Some GPS receivers can be connected to chart plotters, other navigation systems, and autopilots. If you have a DGPS-ready receiver, you still need to buy another receiver that connects to it to decode the DGPS beacon data to get the extra accuracy.

To illustrate the changes in 2000:

The United States government owns and controls the GPS (Global Positioning System). A U.S. bill passed in 1996, included a provision which prohibited the Department of Defence from using selective availability (SA) for GPS service. SA is the intentional degradation of accurate positioning information for GPS used by the public. If SA was removed, the accuracy of GPS positions indicated by receivers would improve from 100 metres 95% of the time to 15-20 metres 95% of the time. The good news is that the U.S. government has decided to remove SA. (Press release May/2000

Many buoys, bells, fog horns, and lights will be removed as a result of the use of all these new electronic aids. Many aids will be privatized or downgraded (lights to unlighted spars). Some lights and lighthouses will be converted to unlighted buoys in "pleasure" craft channels. Some buoys in commercial channels will be removed.